The African species time-distributed model was trained using almost 250,000 videos from 14 countries in West, Central, and East Africa. These videos include examples of 30 animal species, plus some blank videos and some showing humans. To evaluate the performance of the model, we held out 30,324 videos from 101 randomly-chosen sites.

One use of this model is to identify blank videos so they can be discarded or ignored. In this dataset, 42% of the videos are blank, so removing them can save substantial amounts of viewing time and storage space.

The model assigns a probability that each video is blank, so one strategy is to remove videos if their probability exceeds a given threshold. Of course, the model is not perfect, so there is a chance we will wrongly remove a video that actually contains an animal. 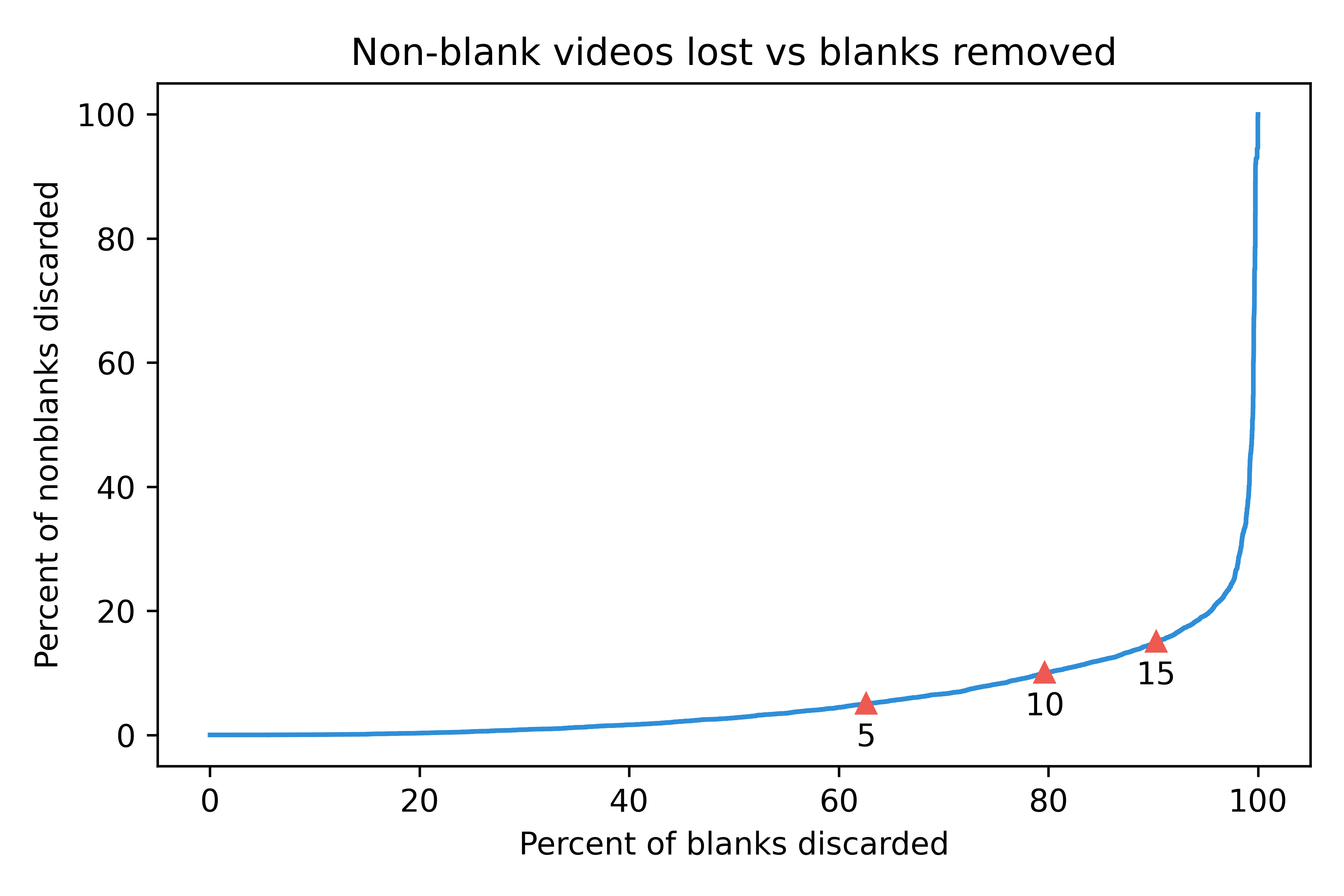 In addition to identifying blank videos, the model also computes a probability that each of 30 animal species appears in each video (plus human and blank). We can use these probabilities to quantify the accuracy of the model for species classification. Specifically, we computed:

These results depend in part on the species represented in a particular dataset. For example, in the small number of videos from Equatorial Guinea, only three species appear. For these videos, the top-1 accuracy is 97%, much higher than the overall accuracy. In the videos from Ivory Coast, 21 species are represented, so the problem is harder. For these videos, top-1 accuracy is 80%, a little lower than the overall accuracy.

Recall and precision by species¶

One of the goals of classification is to help with retrieval, that is, efficiently finding videos containing a particular species. To evaluate the performance of the model for retrieval, we can use 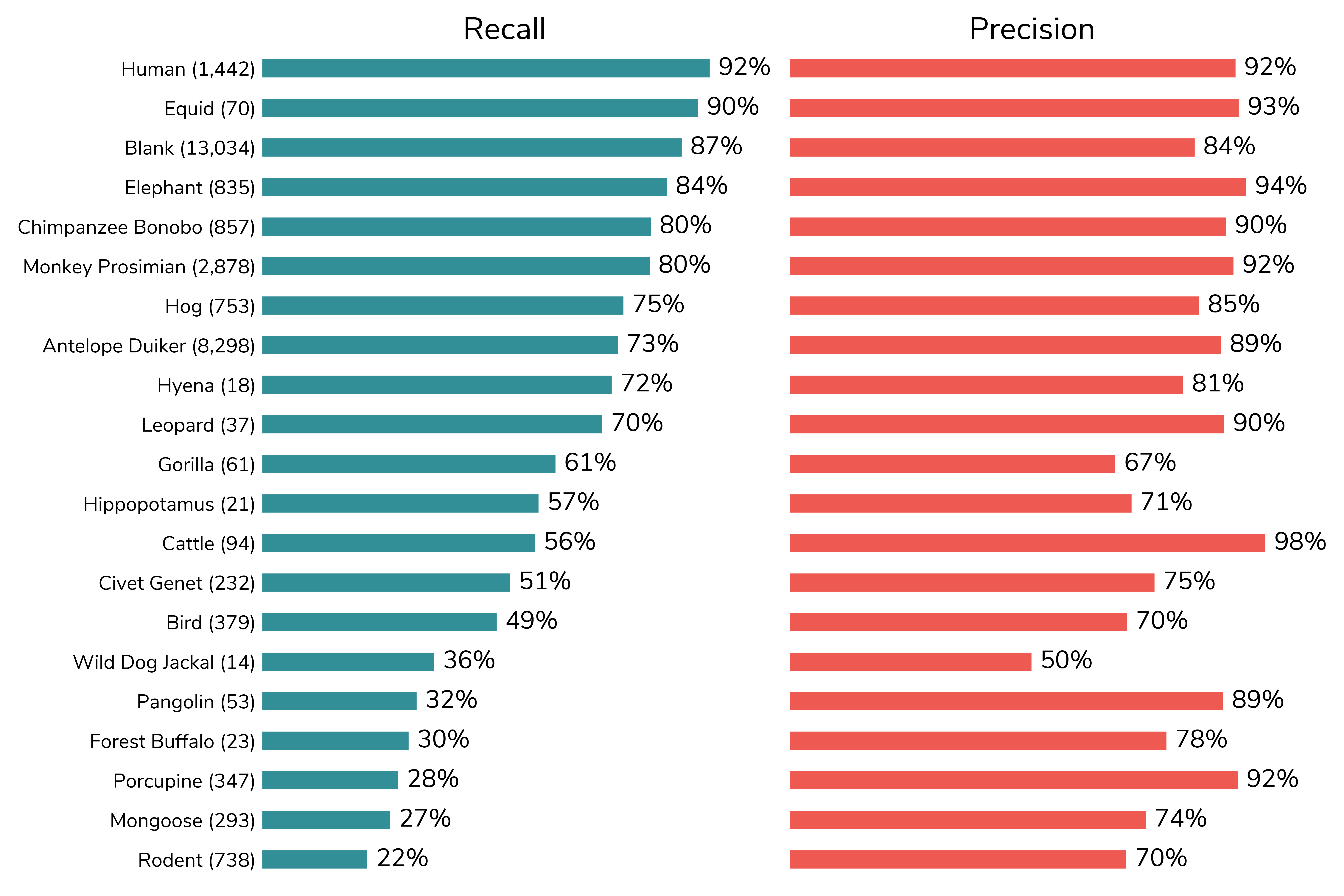 It's clear that we are able to retrieve some species more efficiently than others. For example, elephants are relatively easy to find. Of the videos that contain elephants, 84% are correctly classified; and of the videos that the model labels "elephant", 94% contain elephants. So a researcher using the model to find elephant videos could find a large majority of them while viewing only a small number of non-elephant videos.

Not surprisingly, smaller animals are harder to find. For example, the recall for rodent videos is only 22%. However, it is still possible to search for rodents by selecting videos that assign a relatively high probability to "rodent", even if it assigns a higher probability to another species or "blank".

Description of the holdout set¶

All 14 countries are represented in the holdout set; the following table shows the number of videos from each country. These proportions are roughly consistent with the proportions in the complete set.

The following figure shows the number of videos containing each of 30 animal species, plus some videos showing humans and a substantial number of blank videos. 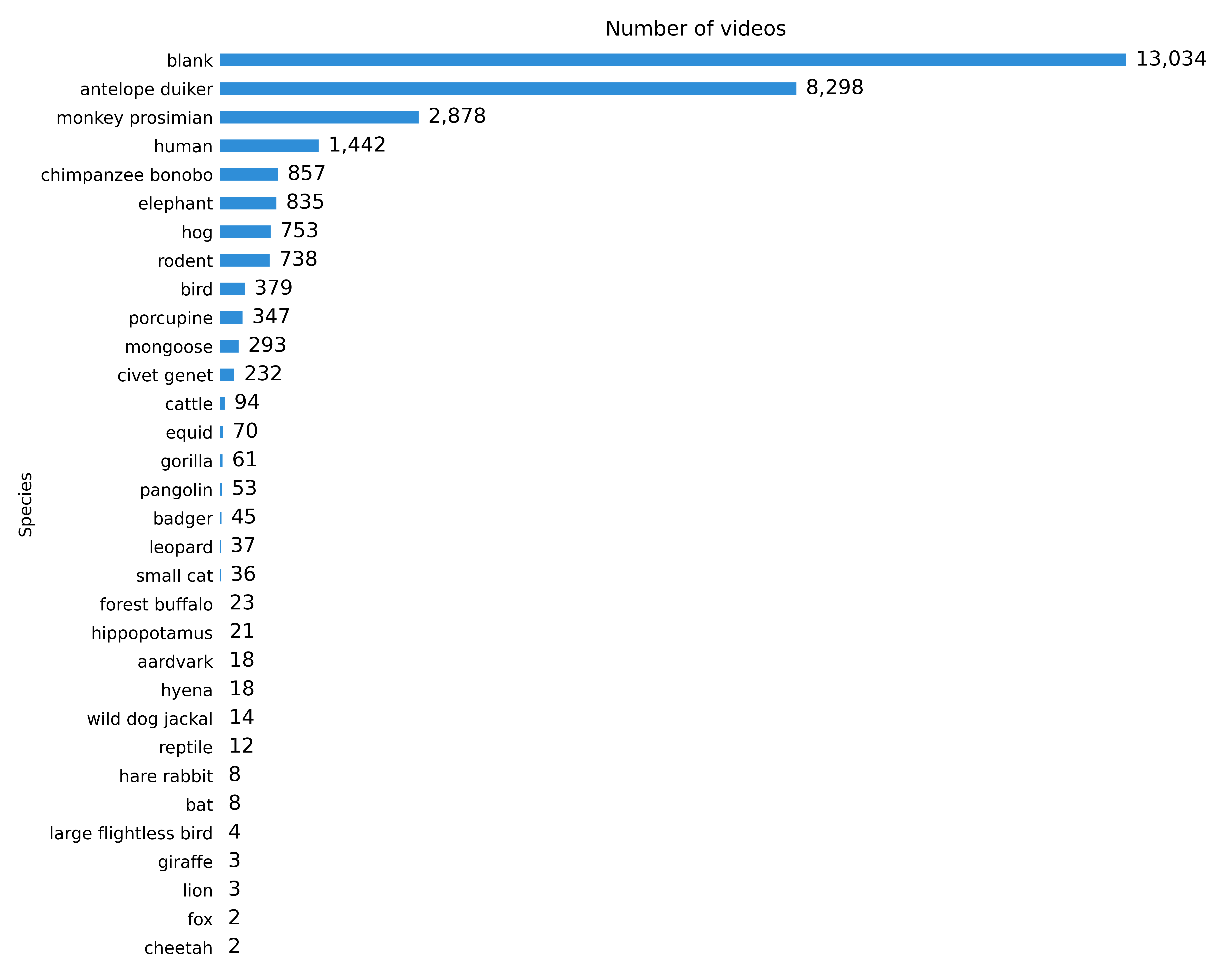 One of the challenges of this kind of classification is that some species are much more common than others. For species that appear in a small number of videos, we expect the model to be less accurate because it has fewer examples to learn from. Also, for these species it is hard to assess performance precisely because there are few examples in the holdout set. If you would like to add more examples of the species you work with, see how to build on the model.